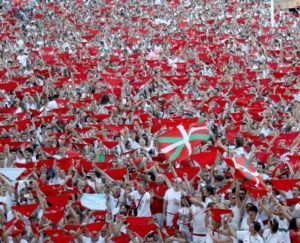 The village festivals are also called “local festivals” or “Feria” and are an integral part of the Basco – Landaise culture.

There are more than 200 that are organized by the municipalities of Landes each year.

According to the places of the bull releases are held in the streets as for example in Dax, the city is 30 minutes from Seignosse. So why not try the experiment?

Other important festivals are Mont de Marsan, Bayonne or even Pamplona in Spain

Some dates to remember for this year 2020:

At the ferias, dressing in white and red is usually a prerequisite, but some cities have their own colors such as Mont-de-Marsan or Soustons who chose blue and white.

The ferias of Saint Vincent de Tyrosse and Soustons are smaller but also closer to the campsite! We can assure you to spend partying there is still worth it!

In these ferias we can gather around parades of bandas as well as the races landaises but also contest of fishing, tournaments of petanques, meals in the bodegas or traditional spectacles.

If you want to party and have an unforgettable experience, inquire at the tourist offices who will give you the dates and ways to access safely the various local festivals.